Here we have for you a comparison and shootout out of an original dbx 160 from 1971 with a few different emulations and modelings of it.

A bit of background on the dbx 160.It is one of the most famous and popular VCA type compressors.   It was originally introduced in 1971 and since then there have been a bunch of revisions made by dbx, and a lot of digital replications made.   With an easy to use 3 knob front plate that does not feature any attack and release controls. It has a quite quick attack and release setting with a characteristic fast response.   It has an adaptive time constant that adjusted the attack to be faster for transients and is slower for lower frequencies.The dbx 160 is commonly used for bringing punch and thwack out in drums, as well as being very popular on bass - real and synth.  The unit has no attack and release settings or adjustable knee (it is a relatively hard knee compressor) so it can be a bit of a one sound compressor - but it does that sound so very well…...as you will find out if you do not already know.

In this comparison/shootout we will be looking at:

If you find this review useful,  can we ask you to like our Facebook Page or Sign up to our Newsletter at the bottom of the page so we can let you know when new ones are available?

Check out the Plugins here if you like what you hear and want to pick up a copy: Waves dbx 160, UAD dbx 160, Stillwell Audio Major Tom

We have added in the box tones of all the units for your listening too (audio passing through the unit with no compression applied).The original dbx 160 sounds very punchy and forward - this is heavily exaggerated in the 20to1 ratio setting, especially in the 200Hz and 1kHz area (check out the kick).  Notice how with heavy amount of compression the drums remain very punchy (if not more so). The original dbx 160 seems to bring forward the most mid range thwack and punch that the compressor is renowned for.  Listen to how the top end and mid range changes in the kick. The low end of the kick also tightens as is expected by this type of compressor.The emulations we find to be the most similar in the mid range response and compression to our particular analog unit  is the Stillwell Audio Major Tom and the Waves dbx 160. Both of these also bring forward the same amount of mid range and punch in the compression.  The Waves brings forward a bit more of the cymbals and top end brightness than the Major Tom Comp which has a bit more harmonic distortion going on in the 2-6kHz area and the most noticeable pumping (e.g. at 20to1) which we really like as an effect.  The Logic Pro emulation of the dbx 160 seems to lack the top end that carries through in the original, particularly above 10kHz.

The Universal Audio dbx 160 is, as expected high quality and smooth, definitely smoother than the Waves or Stillwell Audio versions.

All of the compressors have different low end characters.   The UAD has the most extended low end, followed by the closely by the Waves, with the Major Tom having the least.   None of that is a good or bad thing, they are just different characters that are totally usable. The Logic Pro version to our ears is the least defined for low end, which echoes the lack of definition it has in the high end. In the low mids there is an interesting difference between the UAD and Waves compressor, with the UAD having less happening in the 200 - 400 Hz area, which seems to give it a slightly clearer tone, compared to warmth in the Waves version.   It is relatively subtle though, and this difference may purely be due to the different analog units that were used to create them. The analog dbx160 tonally seems to sit in between Waves and UAD.

Overall the emulations stand up very well against the original dbx 160 but each have their own slight and particular character.   We will say in terms of usability the Waves is our favourite especially with the additional mix knob and mid/side capabilities. The Major Tom also has a couple of great added features like the handy soft knee button to activate a soft knee on the compressor, although we have not sampled this (we do plan to soon - it’s on the list) - go get the demo and check it out for yourself.   The Major Tom also has feedforward/feedback selection and peak/RMS detection for more modes to use the compressor in. A slightly hidden feature of this unit is that you can click the Major Tom logo in the middle of the UI to engage oversampling on the plugin - Stillwell says this should reduce some of this distortion characteristics you are hearing. Cheers Stillwell Audio for letting us know about this :) .   The UAD stays the truest to the original design and does not incorporate any of these extra features into its design, keeping it very straight forward and layed out just like the original unit. We think it would be nice for it to have a parallel function.

Found this comparison useful? Can we ask you to like our Facebook Page or Sign up to our Newsletter at the bottom of the page so we can let you know when new ones are available?

Check out a handy article on the logic stock compressor here

Check out the Waves dbx 160 here

Check out the UAD dbx 160 here

Check out the Stillwell Audio dbx 160

Check out an article on the original dbx 160 here

Back to the shootout 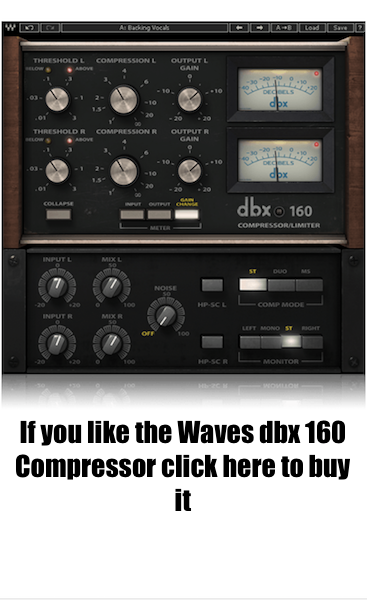