REVIEWS PULTEC REVIEW - PULTEC VS WARM VS UAD VS WAVES

For when you feel like using two rack spaces to get one sound. The original EQP-1 was released in 1951 and had a few versions that you can read about on various sites. The Pultec is a passive tube EQ characterised by smooth wide curves that has been used on countless amount of records over the last 60 years. With quality comes…….Clones.We will be comparing an Original EQP-1A3 from 1971 (Serial # 7412 courtesy of Roundhead Studios) With the UAD EQP-1A and Waves Puigtech EQP-1A plug ins. We will also being comparing these with a clone that is relatively new to the audio world - The Warm EQP-WA.What we thought would be useful is to begin to get an understanding of why these alternate versions of the gear can sound different to the original. That way you can start working knowing which one will give the feel you need for any mix and hopefully learn to get the best out of each type.

We’ve made a number of presets that you can compare to listen and learn, click the link to open it in a new tab, and then check them out in relation to what we found (below).

The low end on the EQs is all pretty comparatively similar bar the waves. The UAD, Warm and Original are all pretty tight and smooth in the low end with the UAD and the Pultec original being the smoothest. The Waves sounds like it has a very different curve to the original and the other clones as on the low end boost it seems to get a bit boxy in the mid range (listen to the ringing on the snare stand out). This also happens on the Warm Audio - but not to the same extent.

On the Mid RangeThe Pultec original sounds the most open, with the Waves following not far behind - they have done a really good job of capturing the feel of the original. This may not necessarily be an openness because of transformer sound or otherwise but could just be due to a wider Q extending more into the higher frequencies than the other EQs.The UAD and the Warm are much more similar in this frequency range and even though they don't open out the top end as much they are still really smooth EQs. Again, as always - this difference may be a function of the particular Pultec we are using for our reference, so take it all with a grain of salt.The Pultec also seems to retain the most punch whereas the Warm seems to smear the transients a touch resulting in a softer feel, which is still nice in its own way.On the High FrequenciesThe Original Pultec is the most open EQ, with a nice amount of Air to the high frequencies and a nice push to the width of the signal. The Warm is really close in many regards and we really have to congratulate them for getting it so close. The UAD sounds very close again with not as much high frequencies. The Waves has the problem here again of boxing up the midrange (listen to the snare). The Warm crunches up a little bit to our ears, and doesn’t seem to have quite the high end extension of our original Pultec but it is far from unpleasant, and you might not notice on many systems or in a mix.

Click Here to open the Shootout Player in a new window and blind test yourselfOn the Lows The Warm sounds the most….well warm. The UAD sounds the tightest but has the least low end content of the EQs. The Waves has the largest overall boost - Probably due to characteristics of the Q leading into the mid range as mentioned on the drums shootout.

On the MidsThe UAD and the Waves are very similar here with the Waves having a slightly mushier low mids. The Original Pultec seems to be brighter and more harmonic whereas the Warm sounds a bit more rolled off in comparison to the other three.

On the HighsPretty much the same as on drumsOriginal is the most open, Waves is a bit mushy in the mids - UAD and Warm are similar.

Overall on the vocalsThe Pultec is the most open and wide sounding EQ of the four. The Warm is the most full but can come out sounding a touch dull and crunchy against its counterparts, but the slight (tiny!) forwardness with the 3kHz boost could suit some styles more than the actual Pultec. The Waves sounds a bit mushy in the mids and the UAD with curves close to the original but just not as much openness as the original. Listen to - Crunching on sibilance - width and top end, especially on the reverb tails - Boxiness on plosives and vowels.

Hopefully you find our perspectives useful for understanding the similarities and differences of the replicas of the original Pultec sound.   As you can hear, all of the replicas have areas where they are quite similar and others where they diverge into their own character compared to our particular test Pultec.   As an analog replica, Warm Audio once again have done a pretty impressive job, especially considering the low cost compared to an original Pultec from 1971.   Based on our own studies with other replicas of classic gear we think that if you could track down similar transformers to the original spec Pultec transformers you would get the Warm EQP-WA sounding even closer overall.   One potential option is the Cinemag S217D transformer, which is apparently an exact replica of the original Pultec Peerless transformer.   Warm of course use Cinemag transformers, so it may be an easy switch these. (the Cinemag S217D's cost ~US$225 each, so are probably not used in the stock EQP-WA we are guessing).

Universal Audio once again have impressed with their attention to detail, and similarity to our Analog test unit, Waves has less of a similarity to our unit, but then also takes much less processing power than the UAD so that seems fair enough.

Here is a graph of a 100Hz 5dB Boost through the gear to show the different characteristics.   The solid line is the main signal, the heavier dashed line the second harmonics and the lighter dashed line represents the third harmonics.

As you can see each unit has its own levels of second and third harmonic distortion, with the UAD sitting closest (at 100Hz) to our test Pultec.

Here’s another graph of harmonic distortion as a percentage with that same boost.

Check out the Waves Puigtech

Check out the UAD Pultec Series

More info on the Warm EQP-WA

UAD Also has a lovely tips and tricks page for pultecs

Listening tests and assumptions are determined, double checked or signed off at Gearshoot HQ on ATC110ASL Pro monitors.   We reckon that they give us a pretty good chance at getting it pretty well in the ballpark of what it is going to sound like on most other people’s monitors. 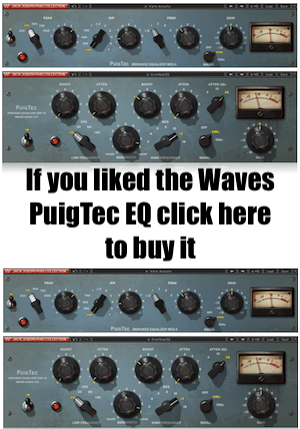