PSP is a developer of high quality audio plugins that have become a staple in many audio engineers diets.   They have plugins ranging from precise mastering EQs through to colourful vintage emulations of gear, metering packages and some really handy effects.One of their reverbs captured our interest recently, being that it is an emulation of some legendary digital reverb units from the semi distant past (the EMT 244 from 1979, and the 245 from 1981) is their 2445 Reverb.As some extra background, the 244 was one of the first digital Reverbs (coming after e.g. the EMT 250 from 1975), so we thought it would be interesting to see how it stacks up against other reverb emulations and some modern equivalents.   Having 16 bit converters with a rolled off frequency response it is a very colourful sounding reverb with a distinctive lack of top end. The 245 was a slightly later revision of the 244, featuring some more added controls and a different conversion engine that was 16 bit with a 18 kHz Sample rate.   Mighty indeed for the time.So, we will be comparing and shooting out the 2445 against another new emulation of an old reverb - UAD’s EMT 250 and also a couple of new digital reverbs - the FabFilter Pro-R, Waves TrueVerb and Valhalla Room. 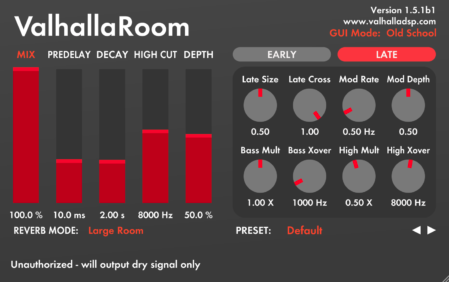 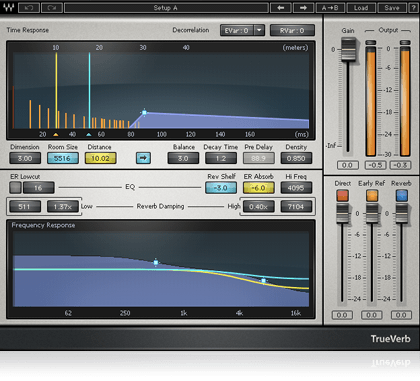 We’ve made a number of presets that you can compare to listen and learn, click the link to open it in a new tab, and then check them out in relation to what we found (below).

One thing to note for the shootouts - on Reverb Plugins (well from our experience anyway) there are differences between manufacturers in how they seem to spec the ‘mix level’ of their units.   And even though they may be using RT60 for decay, it seems that the decay curves differ (which can also be as a function perceptually from any EQ filtering), which of course will give a different sound and perceived length for the Reverb tail.   At Gearshoot we use the specifications from the manufacturer when sampling in gear, for a number of reasons; it shows the gear the way they intend the end user to hear it and use it, plus secondly, adjusting every reverb setting to be exactly compliant in the maximum number of possible factors takes an enormous amount of time and may mislead the end listener away from the actual ‘dial up sound’ of the unit.   We could write pages about potential ways of sampling in gear, but ultimately we feel that what you should be listening for is the tone of the reverb and how that appeals, or doesn’t to you.   And that is something you can easily pick up despite slight any apparent differences between units of the feel or perceived length of the decay.

When comparing the 245 and 244 the 245 comes off as a bit more lush and full than the 244 - As you would expect being a newer and revised version.   When combined they get a bit more richness and I think the top end and sparsity is increased.   Despite having the pre delay as low as possible the delay is not instantaneous and it rises up after a short delay compared to some of the other reverbs.   These have more energy later in the reverb that holds out for quite awhile - has a very non linear decay until the delay time is up and sound surprisingly natural for being a recreation of such an old digital reverb.   The 245 has an interesting semi fast or ‘bouncy’ modulation (notice at the end of the words things) that you don’t hear as much on the 244.The UAD is a very punchy with an explosive beginning that fades in energy and tapers off very quickly (obviously you can increase the RT60 on this unit though).   It has fairly a similar tone character to the 2445 but with a lot more low mids and centre signal whereas the 2445 is more scooped and wider.The Pro-R has the most extension into the high frequencies and they sound very natural and pretty - not phasey and well portrayed from the original signal.   The wide high frequencies make for a very wide reverb - listen for how it gets wider as it reverberates and the lack of mid signal with the reverb.   It doesn’t have the slight modulation effect that you can hear on places on the 244, 245 and Valhalla.The Valhalla is a lot more similar to the Pro-R. Same amount of fullness and a nice clean reproduction, it does not have as much extension into the top end but this lends to a more natural feel than its super uncharacterised replicative counterpart - the Pro-R.   It has an interesting way that it seems to pick up certain harmonics in places compared to some of the other reverbs.The Waves TrueVerb has slightly less lushness and low end (especially noticeable in the ~200Hz area) for its room preset compared to some of the other units, which may be a character of the particular room.   It is different to, for example the Valhalla Room in that it doesn’t have as apparent slow modulation at the end of the tail.

The 245 compared to the 244 has more low mids and a little more bottom end, giving it some more lushness but not as bright of a feel to the reverb. Both have very similar characteristics in the decay. The higher frequencies in the 244 have a nice slap to them and seem to have a different energy spread than the lower mids which tail out longer.   When combined the reverb becomes a lot more lush and the higher frequencies that jumped out and slapped a bit in the 245 are a lot more controlled, very nice and natural sounding.

The UAD EMT 250 has a lot more early energy and tails off quite quick, has a very parabolic style decay. It is a very midsy reverb that has that big gunshot style sound - gives a bit more of that cavernous sound because of how nonlinear sounding it is across the mid range, very cool character to this reverb - Being a revision of an old EMT it is obviously not meant to be a super slick modern EQ.The FabFilter Pro-R again has a nice extension into the top end and is very wide sound. This is a reverb that does not have much centre signal to it when compared to something like the Valhalla Room.Valhalla Room does not have the same amount of top end as the Pro-R but it does have a bit more guts in the low mids and has more of a centre signal than the Pro-R does, lending to it being a more full sounding reverb.The Waves TrueVerb is very natural sounding - quite a lot of bottom end with a touch of a scooped sound when compared to the Valhalla room.   Check out the end of the tail for how the frequencies decay where it gives a slight lingering enhanced or more noticeable harmonic of part of the snare compared to the other reverbs (that for example the Pro-R doesn’t exhibit). It has a similar tail type to the PSP 2445 reverbs with a nice distribution of early and late reflections and a nice linear decay.

Really there are two different styles of reverbs in this test. One set with more character and the old school modeled sound (PSP and UAD) and the other set with a full range more modern reverb (Valhalla, FabFilter and Waves).   When it comes to the more modern digital sounding reverbs we really do like the FabFilter Pro-R.   When it boils down to it, it is perhaps not as ‘natural’ sounding as the Valhalla in our opinion (at least on the settings we tested, and it is super versatile to put it mildly, so put some time into it), but it is a reverb with massive width and very nice top end and sounds expensive.   This would be very suitable as a Pop reverb, great on vocals!   Also good to note that we really like the interfacing on the Pro-R - once again FabFilter win on the modern aesthetics vibe - and there are some seriously good sounds you can get out of it. Especially with the Depth parameter!The PSP 2445 Reverbs. Wow. These are great, they are incredibly natural sounding and ‘comforting’ (which to be honest we were quite surprised and how much we liked them for everything we tried, and not just as a limited use effect; being that they are based on such an old and in a sense - Lo-Fi Reverb - Just shows how a shootout can evaporate your pre-conceptions and biases - we should have trusted our previous experience of PSP’s quality of stuff they release).   They have a very nice lushness to them and a very cool decay style. There are definitely different subtleties between the 244 and 245 but to us the real gold is when they are combined, thank you so much to PSP for adding this feature in.   In this setting the slight differences between the reverbs add another depth to the lushness and make for a very full, but not overbearing sounding reverb.

Check out the Valhalla Room

Check out the Waves TrueVerb

Check out the Fab Filter Pro-R

Sign up to our newsletter below ↓↓↓↓ Back to the top